Born to support the cryptocurrency Bitcoin (recently released on the Stock exchange), blockchain technology sounds a lot lately and promises a faster, easier and safer future.

Blockchain allows you to eliminate centralized monitoring and authentication and delegate that work to a distributed network, not only not compromising the security and integrity of the data, but strengthening.

In the words of Don Tapscott and Alex Tapscott, founders of the Blockchain Research Institute:
“Blockchain technology is an incorruptible digital accounting book of economic transactions that can be scheduled to register not only financial transactions but virtually anything that has value “.

What is blockchain?
Just what it name indicates: a chain of blocks.
As in any chain, each block is bound to the previous block and to the next one.

Each block carries the corresponding information (financial transactions in the case of virtual currencies) and a header information, in which the identifier of the previous block is included.

How does this chain work properly and securely?
See the characteristics of this technology.

Replicated database… in millions of nodes

The information contained in a blockchain is a shared database, replicated in multiple nodes (computers), which is continuously updated and validated. There is no centralized version of this information that anyone can steal or corrupt. The data are accessible and verifiable for anyone on the Internet, or at least within each blockchain network, as there are public and private blockchain networks.

An analogy of blockchain with respect to the traditional centralized system can be done with Google Docs/sheets and the classic document of text or spreadsheet that the colleagues of work send by email and can only be edited by one person in a specific moment. This is the same system with which banks maintain balances and money transfers and are sold airline tickets: Access is briefly blocked while a transfer is made, then the access is updated and re-opened. With Google Doc/sheets, all users have access to the same document at the same time, and the single version of that document is always visible to everyone. In many workplace scenarios this way of working with unique, shared and editable documents at the same time, greatly facilitates the work and saves a lot of time. Obviously, we don’t need a chain of blocks to share documents, but this analogy illustrates the advantages that the blockchain replicated database provides.

A network of nodes… without central node

A node is any computer that connects to the blockchain network (P2P network) using a client. When connecting to the network, a copy of the blockchain is automatically downloaded.

Each node is a blockchain administrator and voluntarily joins the network (in this sense, the network is decentralized because no one authorizes or denies access and all nodes are the same). Each one has an incentive to participate in the network: the possibility of winning “prizes” by validating blocks.

In the case of Bitcoin, a global network of computers uses blockchain technology to jointly manage the database that records bitcoin transactions. In other words, Bitcoin is managed by its network and not by any central authority. Decentralization means that the network operates from user-to-user (or peer-to-peer). 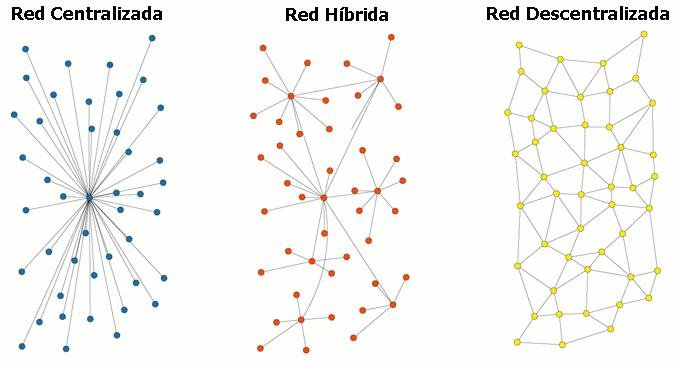 Once a node decides to undermine, you can create a new block with pending transactions.

At that time, compete with millions of nodes to see if your local block will become the next chain block for the entire network. This competition is done by “throwing the dice”, that is to say, executing an algorithm to find a random key that allows to validate the block. This algorithm is known as “work Test”.

The fundamental idea on which it is based is that the nodes involved in a system must provide proof of their interest in the system. To do this they have to show that they have devoted a certain amount of resources: in this case time of computation; This is the test of work. The cost of verifying that test for the other nodes should be reduced, and so it is, since checking that the key is correct for the block is very fast.

The work test is a distributed consensus protocol for distributed networks, in which finding the random key to validate a block is very unlikely, because of design. Miners should invest time and effort and be very lucky. This prevents fraud and makes the network secure (unless a malicious user owns more than half of the nodes on the network). Despite the random character, being many mining nodes, there is a probability that some guess in a certain time and new blocks are published in the chain in a fixed time interval. In Bitcoin, the blocks are published every 10 minutes on average.

If a node finds the key, the block is confirmed and sent to all other nodes on the network. All nodes check that the block is correct, add it to your copy of the chain and try to build a new block with new pending transactions. Obviously more than one node can generate one block at a time and send it to the rest of the nodes. This conflict is resolved with the longest chain rule:

The validation of blocks is called mining by analogy with gold mining, where there was a random factor when it comes to finding gold and also a reward in case of success; The Bitcoin block mining brings with it an economic reward in the form of bitcoins. People who handle nodes in a chain of blocks are also called miners.

Is there really no danger?

From the point of view of the operation of the network and the reliability of the information, we have seen the robustness and security that this technology provides.

From the point of view of the user’s valuable information, which is money in the case of virtual currencies, the user must have a very good collection of his wallet and private key. There is no “I forgot my password” button and you cannot call any door. You must have the corresponding backups of the digital portfolio and not lose the private key.

We have recent examples of these human failures, from spending months of anxiety for losing the key to trying to register a municipal landfill to find a laptop whose hard drive has been saved 100 million euros in Bitcoins.

By creating a new way to verify transactions, traditional trade controls may become unnecessary. Stock market operations become almost simultaneous in the chain of blocks and decentralization is a reality. Bitcoin transactions in 2016 assumed an average of more than 200,000 dollars per day.

The Web gains a new layer of functionality with Blockchain technology:

With the added security brought by the block chain, new business on the Internet can emerge outside of traditional financial institutions. The blockchain technology promises future, but it is already also a reality:

The Soltel group is also working on BlockChain technology through the I+D Division and Software Engineering Division. Currently participates in a national consortium of companies, universities and research centers for the development of blockchain technology that allows the generation of new services. Soltel will propose new solutions in the industrial and energy fields for the management of the identity, reliability and traceability of the transactions of goods and services that provide significant improvements with respect to other solutions based on previous technologies.

In addition, the consortium as a whole will address the following lines:

It is difficult to say today whether Blockchain will assume the revolution that promises or end up being a speculative bubble, as some voices suggest. However, there are already many real projects, pilot projects and, above all, a lot of projection in multiple applications. Let’s hope that the technology will continue to establishing and allow us faster, simpler and safer operations.